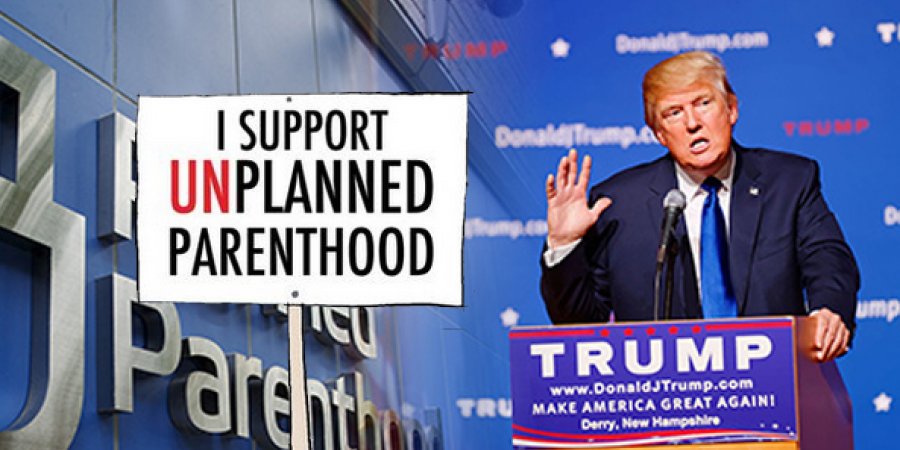 Trump tells Planned Parenthood to give up planning

I'm fully aware that Trump is so unplanned news of yesterday already, but I can't help but open my laptop, seeing yet another ridiculous statement from Trump again.

Yes, Planned Parenthood is a great thing, but I hate the planning bit, and as such, I'll take away the funding of it. Just for the sake of it.

While Trump claims to have evolved over time, and so have his opinion about planned parenthood and abortion, or as he said, "I have evolved on abortion issue, like Reagan evolved," to most people evolving takes time. But Trump being Trump, during his election campaign, he managed to change his mind about it five times over three days. Now that's a quick.

In the end of March 2016 when MSNBC's Chris Matthews asked him about where's he's standing on the topic, he said that "there has to be some form of punishment." (for planning?)

Just one hour later, he released a statement saying "This issue is unclear and should be back into the states for determination. Like Ronald Reagan, I am pro-life with exceptions, which I have outlined numerous times."

One and a half hours later from that statement Trump's campaign released a more formal statement on the topic, saying "If Congress were to pass legislation making abortion illegal and the federal courts upheld this legislation, or any state were permitted to ban abortion under state and federal law, the doctor or any other person performing this illegal act upon a woman would be held legally responsible, not the woman."

Next day, April 1, 2016, he said on CBS that "The laws are set now on abortion and that's the way they're going to remain until they're changed. I would've preferred states' rights. I think it would've been better if it were up to the states. But right now, the laws are set.... At this moment, the laws are set. And I think we have to leave it that way."

Around three hours later the Trump campaign explained - "Mr. Trump gave an accurate account of the law as it is today and made clear it must stay that way now - until he is president. Then he will change the law through his judicial appointments and allow the states to protect the unborn. There is nothing new or different here."

In response to Trump's support to unplanned planning this week, a big donor to Planned Parenthood, Diane Max, said that Trump has been "sympathetic to a woman's right to choose until it was politically unpopular."