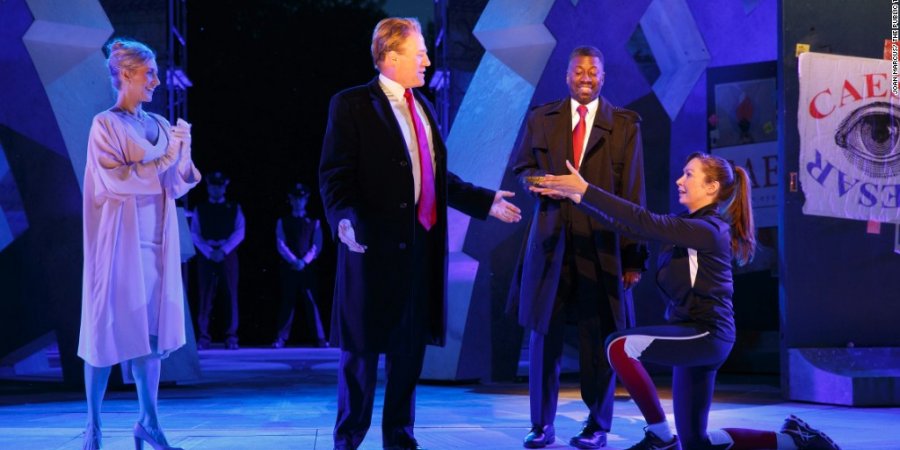 Stupid people get it wrong, again

After the Public Theater in New York chose a classic play as the first play of the season, Shakespeare's Julius Caesar, stupid people seemed to have gone berserk. Why? The title role was played by a man who looked like the real orange guy, sorry, Donald Trump.

But that's not the problem here. You might like it or not. Matter of taste. It could have been a stupid idea to kill Trump, sorry, Julius Caesar, on the stage. Maybe. But that doesn't matter here either. What matters is what stupid American people did next.

They started sending threats to the theater and making angry phone calls. The theaters got emails like "I hope you die and so do your family," or "You truly are a bunch of freaks... We should send all you freaks to ISIS. They would eliminate your stench on this earth with real knives." or "Your play depicting the murder of our President is nothing but pure hatred. You are vial [sic] despicable excuses for human beings. I wish you all the worst possible life you could have and hope you all get sick and die." or "Hope you all who did this play about Trump are the first to die when ISIS COMES TO YOU... scumbags."

And so on. And even that isn't what makes those angry people stupid.

What makes them stupid is the fact that too many of them sent the threats to the wrong theaters. Idiots like those people probably just checked their old phone books and got in touch with any theaters with Shakespeare name in it. Shakespeare Dallas theatre got 90 emails, Shakespeare & Company in Massachusetts 50 and so on.

If you don't like something, okay, understandable. But don't make death threats. Or if you definitely do have to make them, you might as well make them to the right people. Otherwise you really are as stupid as you make yourself look by making the death threats.

Donald Trump Jr tweeted about the play, asking: "Serious question, when does 'art' become political speech & does that change things?" We can answer, no, it doesn't change things. Nor people for the matter. Just look at your father. Some people never change.